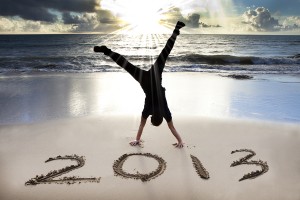 I like to make an impact. And I’m very good at getting things done, solving problems, and achieving excellent results. As a result, on any given project or initiative, my natural tendency is to become the project team’s hub rather than one of the spokes. That means practically every decision or significant activity will require my input — which will not only limit our team’s impact to my finite ability to manage things, it will also take up a large portion of my time.

Can you relate? And can the high-performers on your team relate?

One of the shortcomings of many movers and shakers (read: leaders) is our tendency to be at the center of everything. This puts a cap our effectiveness and often leads to workaholism and/or burnout.

I encourage you to spend some time during this last week of 2012 thinking about how to make 2013 really rock. Here are three strategies that can help you and those lead have greater impact while staying energized.

Years ago, I read Workaholics, Make Laziness Work for You by Wayne Oates, the psychologist and professor who coined the word “workaholic” in the 1970s. The main “aha” concept for me was that if you can refrain from adopting a central role, you’re more likely to contribute your talents without overworking. For some people, this may mean staying out of formal leadership positions. For others, it may mean limiting the number of times you step into any central role, such as the project manager for a certain initiative.

Since recognizing the principle of periphery, I have held back on many occasions when I was tempted to take a central role or leadership position. While I love to lead, sometimes it’s more fulfilling to contribute without being in charge.

For example, after working several years in a leadership role at a consulting firm, I asked for a demotion so that I could focus less on people management — and more on client service, sales, and my family responsibilities. However, when you are motivated by the desire for impact, it can be painful to stay in the periphery. After a year or two, I grew dissatisfied in my less-influential role; when my boss suggested that I take on a leadership position, I did. (Alternatively, I could have learned to develop greater influence without the formal leadership position.)

Can you be the boss and still embrace the periphery? Yes, if you practice delegation — and even better, interactive leadership.

2. Delegate Everything That Doesn’t Have to Be Done By You

If you do take on a leadership role, you can still improve your work effectiveness and satisfaction by becoming a master of delegation. The first activities you should delegate are those that don’t play to your strengths: work that you aren’t naturally good at or that de-energizes you. You can almost always find someone who would be happy to perform those tasks.

For example, for the first seven years after launching Aspendale Communications, I did all the bookkeeping myself. This both saved money during the start-up phase and also helped me be sure that I fully understood the business. As the company grew, however, bookkeeping was taking up too much of my time, and I had long passed the point where I was learning or enjoying that type of work. We then hired a part-time bookkeeper, but eventually we retained the firm IAC Professionals to have more state-of-the-art accounting practices.

You should also consider delegating work that you may enjoy, but could be done by someone other than you. This is necessary so that you keep learning and growing, and to give other people the growth opportunity of taking on that work. However, as you delegate work you enjoy, be sure you replace it with activities that are higher value and still play to your strengths. (Otherwise, you could find yourself in a spot similar to Ewan Williams, who discovered that he no longer enjoyed being CEO of Twitter.)

Interactive leadership is a term coined by research psychologist David Burnham. Whereas delegation focuses on you at the center making things happen through your team, interactive leadership is about your team making things happen. You are the leader, but you choose to stay at the periphery by cultivating a team that makes decisions and creates a shared purpose that energizes the team.

A delegating leader makes decisions, provides information as needed, casts a vision, and directs work. That’s a recipe for bottle-necking and burnout.

An interactive leader stimulates healthy dialogue, helps the team discover and stay focused on its purpose and vision, and creates the conditions for productivity and growth.

Learn to embrace the periphery, not as an individual contributor, but as a leader. Yes, you need to delegate — but don’t just delegate activities, delegate leadership. And help the people on your team learn to think and lead that way, too.

I’ve written and talked about interactive leadership several times. Here are a few resources to help you learn more: